Title: ENDING IN A TIE 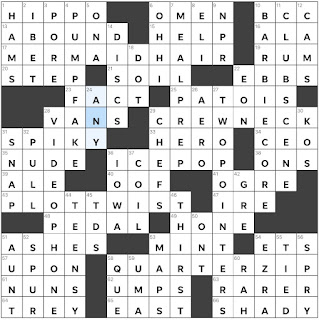 Theme Answers:
MERMAID HAIR (17A: Tress style named for a mythical creature)
CREW NECK (29A: Simple T-shirt style)
PLOT TWIST (43A: Story surprise)
QUARTER ZIP (58A: Fleece jacket style)
Theme synopsis: The ENDING word of each theme answer is a type of TIE. We have a HAIR TIE, a NECKTIE, a TWIST TIE, and a ZIP TIE.
And now a word from our constructor:
Brooke: happy to be on sally's blog two days in a row! i really like the long down "bonus" answers i was able to include with this grid. hope you enjoyed the solve!
Things I learned:
Random thoughts and interesting things:

Which theme answer is my favorite today? Of course, it's a four-way TIE! (Did you see that PLOT TWIST coming?) In addition to the theme, there are a lot of other great answers: TWO POINTERS, MEAL PREP, TEENSY, and CLUB SCENE, as well as those I've already highlighted. Thank you, Brooke, for this puzzle that was a fabulous way to start my Tuesday.
Many thanks to Brooke, Shannon, and Matthew for guest blogging the last few days! And one more thing: You still have a few days to send me your answer to the first ever Sally's Take Contest. See the September 30 write up for details of this meta-blog puzzle. If you need a hint to get you started, feel free to message me and I'll be happy to nudge you in the right direction. Good luck!
Brooke Husic