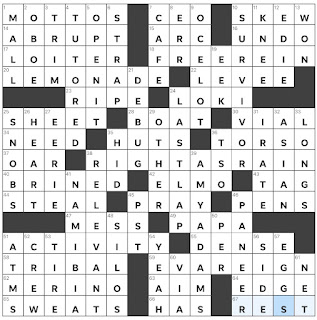 Theme Answers:
FREE REIN (18A: Carte blanche)
RIGHT AS RAIN (38A: In good order)
EVA REIGN (59A: Actress in the 2022 rom-com "Anything's Possible")
Theme synopsis: The last words of the theme answers are homonyms, words that sound alike but have different meanings. One of those homonyms is WEATHER, and two are NOT: REIN, RAIN, REIGN.
Things I learned:
Random thoughts and interesting things:

I enjoyed this homonym theme, and the title of WEATHER...OR NOT made it even more delightful. Shoutout to the fun clue for KNEE (11D: Body part that can't touch the sheet in Twister). I also liked the answers LAST LAP, LEMONADE, and RELEVANT. Thank you, Erik and Neville, for this puzzle, which was a fantastic way to begin my Friday. It is not an exaggeration to say that I have been looking forward to this day for an entire month, which leads me to...
One more thing today: Announcing the first Sally's Take Contest! Beginning September 1 and continuing through today, I have been leaving a hidden message (in plain sight!) in this month's blog posts. You've heard of meta crossword puzzles...think of this as a meta blog. I invite you to discover the hidden message! If you do so, email me (hoelscher4[at]yahoo[dot]com) with the answer before the end of the day on Sunday, October 9. On Monday, October 10, I will select one random winner from all correct answers, and that person will receive a (limited edition!) Sally's Take mug. Just a little something that hopefully provides a few moments of delight.
Erik Agard Neville Fogarty