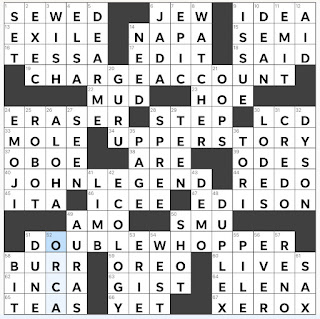 Theme Answers:
CHARGE ACCOUNT (19A: Shopper's pay-it-later convenience)
UPPER STORY (34A: Second floor, for example)
JOHN LEGEND (40A: Singer who starred in NBC's "Jesus Christ Superstar")
DOUBLE WHOPPER (51A: Burger King sandwich with two patties)
Theme synopsis: The ENDS of the theme answers feature synonyms of the word TALE. We have an ACCOUNT, a STORY, a LEGEND, and a WHOPPER.
Things I learned:
Random thoughts and interesting things:
Geography review:
This puzzle tells a delightful TALE throughout, not just at the END. I enjoyed this set of theme answers, and liked that the ENDing words have a different meaning in the theme answer than when used as a synonym for TALE. I also liked the bonus theme material included in the puzzle, the aforementioned EPIC and happily EVER after, as well as PAGE (35D: Part of a book). Nice cluing today - shoutouts to MUD (22A: Puddle gunk) and BURR (58A: Punny last name for a snowman). I also like the inclusion of the reminder that Black Trans LIVES Matter. This puzzle is Sara Muchnick's USA Today crossword debut, so congratulations! Solving this puzzle was a delightful way to begin my Monday.
Doug Peterson Sara Muchnick