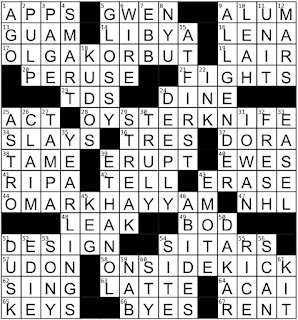 Theme Answers:
OLGA KORBUT (17A: Gymnast nicknamed the "Sparrow from Minsk)
OYSTER KNIFE (28A: "what I mean when I say I'm sharpening my ___" (Ewing poem))
OMAR KHAYYAM (44A: Persian poet/astronomer/mathematician)
ONSIDE KICK (58A: Risky football play)
Theme synopsis: Each two word theme answer consists of one word beginning with the letter O, and a second word beginning with the letter K - OK THEN.
And now a word from our constructor:
Evan: Ah, yes, initial puzzles. This set played reasonably nicely with the grid, despite some tricky letters. I worked to be extra sure that the crosses for the names were fair. My favorite entry in the grid is 9-Down, which I believe is a crossword debut!
Easter egg-ish challenge: Two adjacent entries in this puzzle comprise 2/3 of a famous song title. What are they? (Answer below!)
Things I learned:
Random thoughts and interesting things:
Geography review:
O and K are not the most common letters, meaning that a few of the theme answers might be unfamiliar to some solvers. I appreciated that Evan tried to make sure the crosses were fair. I felt like he succeeded. An enjoyable solve. KUDOS (18D: "Great job!") - I thought this puzzle was more than OK!
And now, more from Evan:
Answer: 30- and 24-Down: “ Truly Madly Deeply” by Savage Garden.
Evan Kalish