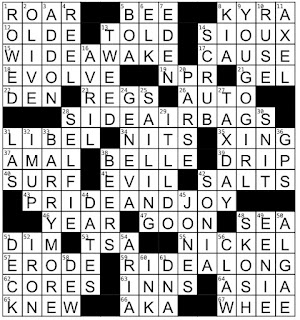 Theme Answers:
WIDE AWAKE (15A: Nowhere close to drifting off)
SIDE AIRBAGS (28A: Protective car features)
PRIDE AND JOY (43A: Cherished child, e.g.)
RIDE-ALONG (59A: Trip that's an anagram of "reloading")
Theme synopsis: Each theme answer has the letters I-D-E-A and those letters span two of the words in each phrase.
And now a word from our constructor:
Evan: This was a fun idea with several nice answers to work with. I do like 43-Across, even if it doesn’t abide by the “Berry rule”—the idea that, for maximum elegance, a thematic concealed letter string should span every word in an entry. I’m thrilled with some of the inclusive cluing in this puzzle (see 37-A, 42-Down, 54-D), and I enjoyed getting in another reference to one of my favorite radio shows (see 19-A).
Random fact: 27-D has never appeared in a [mainstream] crossword before (?!) and 33-D hasn’t appeared as an entry since 2003, at least according to Matt Ginsberg’s “cluer” database.
Easter egg-ish challenge: Two entries in one region of this puzzle are also the titles of two songs by the same singer. What are they, and who is the singer? (Answer below!)
Things I learned:
Random thoughts and interesting things:
Geography review:
I HAVE AN IDEA that this was a delightful puzzle. Many examples of inclusive clues and answers today, as has become a hallmark of the USA Today puzzle. This puzzle is a fine example of how inclusivity does not adversely affect solving experience - rather the opposite, in fact, as it enriches the solve. I especially enjoyed the theme answer PRIDE AND JOY, and the bonus of YOU GO, GIRL!
And now, more from Evan:
Answer: 1- and 15-Across: “Roar” and “Wide Awake,” Katy Perry.
Evan Kalish