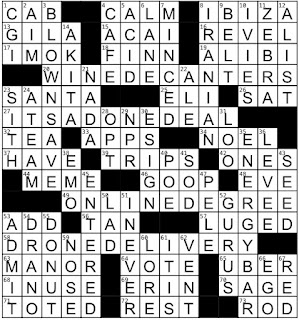 Theme Answers:
WINE DECANTERS (20A: Glass vessels with stoppers)
IT'S A DONE DEAL (27A: "That's that")
ONLINE DEGREE (49A: Distance learning outcome, perhaps)
DRONE DELIVERY (58A: Aerial shipping method)
Theme synopsis: Each theme answer contains the letter string N-E-D-E, spanning two words in the phrase. If you reverse the letter string and read it BACKwards, you find the word EDEN. Therefore, each theme answer contains a BACK GARDEN (of EDEN).
Things I learned:
Random thoughts and interesting things:
Geography review:
This was an enjoyable puzzle and I learned a few things. IT'S A DONE DEAL and DRONE DELIVERY were my favorites among the theme answers. I do have one thing to ADD (53A: Comment further). I discovered that today is National Ice Cream Day. When Ronald Reagan was president, he established the third Sunday of July as National Ice Cream Day. I don't really need an excuse to eat ice cream, but this is a pretty good one. Enjoy your favorite flavor (or flavors) today.
Zhouqin Burnikel