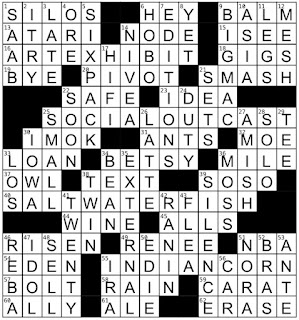 Theme Answers:
ART EXHIBIT (16A: Museum display)
SOCIAL OUTCAST (25A: Pariah)
SALTWATER FISH (40A: Ocean swimmer)
INDIAN CORN (55A: Sofkey ingredient)
Theme synopsis: The last word of each theme answer is a homophone for a musical group: EXHIBIT = Xzibit, OUTCAST = OutKast, FISH = Phish, CORN = Korn.
Things I learned:
Random thoughts and interesting things:
Geography review:
I really enjoyed this puzzle. I seemed to be on the right wavelength for the clues today, and there were many that I enjoyed. NBA (51A: Org. with dunks) made me smile, as did TWENTY (41D: Number of questions in a guessing game). The fill was smooth and I didn't have any rough spots. I had the title, THE SOUND OF MUSIC, in mind as I was solving, but the theme didn't leap out at me. There are many times I don't see the theme until I'm finished though, so I wasn't too worried. Well, to be honest, I was a little worried, because one of my fears since I started this blog has been that I would not be able to figure out a puzzle's theme and then I would not know what to write! I guess I can stop worrying about that now, as today it happened. Fortunately, I threw my plight out to crossword Twitter, and they came through. Special thanks to Will Nediger for shedding light on the theme so that I am able to share that enlightenment with you. Knowing the theme and looking at it now, it's clever! I admire it, but probably would not have ever figured it out on my own, since I'm not familiar with some of these musical groups. Fortunately, not knowing the theme didn't interfere with my enjoyment of the puzzle, and it's nice to know crossword Twitter is there for days like these!
Patrick Blindauer