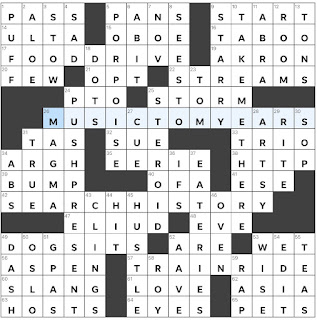 Theme Answers:
FOOD DRIVE (17A: Event to combat hunger)
MUSIC TO MY EARS (26A: Something I love to hear)
SEARCH HISTORY (42A: List of visited webpages)
TRAIN RIDE (57A: Journey from Union Station)
Theme synopsis: The first word of each theme answer can follow the word SOUL to give us SOUL FOOD, SOUL MUSIC, SOUL SEARCH, and SOUL TRAIN.
And now a word from our constructor:
Brooke: - i recommend listening to this slam poem by Taylor Steele about the appropriation of AAVE
- shoutout to natan and hannah's guinea pigs for the inspiration for 64a and 65a -- the one in the photo is cannoli (photo credit: hannah)
Things I learned:
Random thoughts and interesting things:

An enjoyable theme today presented in a beautiful and striking grid. My favorite theme answer is MUSIC TO MY EARS. I also smiled at the appearance of HTTP (38A: URL letters before ://) just above SEARCH HISTORY. Another fun thing: TAKE ME THERE with its relatable clue (10D: "Ugh, that looks like the perfect destination"). Thank you, Brooke, for this puzzle, that was a terrific way to start my Tuesday.
Brooke Husic