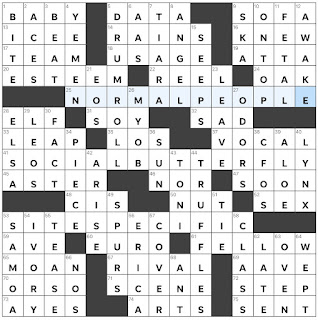 Theme Answers:
NORMAL PEOPLE (25A: Sally Rooney novel-turned-series about a complex relationship)
SOCIAL BUTTERFLY (41A: One who "flits" in well with everyone)
SITE SPECIFIC (53A: Like Maya Lin's earthwork "The Wave Field")
Theme synopsis: The first word of each theme answer can be preceded by PARA, giving us PARANORMAL, PARASOCIAL, and PARASITE.
And now a word from our constructor:
Zaneb: this puzzle came from me studying the parasympathetic nervous system for my final and my mind wandering to think of other words that start with para. "SYMPATHETIC EAR" did not make it to the final grid but im happy with how it turned out ...
the idea of a " parasocial butterfly " is interesting to me
i enjoyed learning about cradleboards, mocha, & chinese puzzle balls
also liked looking at lynxes
thank you to erik for his guidance along the reworking process and his edits !!!
Things I learned:
Random thoughts and interesting things:

Congratulations to Zaneb Akbar on her USA Today crossword debut! Three fabulous theme answers today, making a TROUPE of interesting PARA- words. As I was reviewing the puzzle after solving, I began marking clues I liked, and there were a lot. Here are just a few of the clues I particularly enjoyed: DATA (5A: Fodder for a graph), SOFA (9A: Safe spot when "the floor is lava"), TEAM (17A: There's no "i" in it), and DRUMROLL (5D: Suspenseful percussion). This puzzle was a delightful way to begin my Monday.
Zaineb Akbar