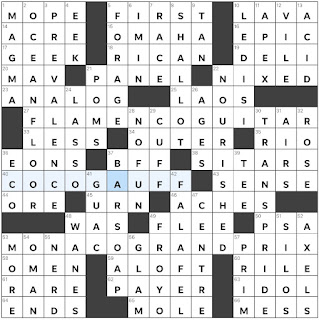 This puzzle solved like a well-oiled MACHINE, with the COGs falling into place nicely. As noted above, there were a number of paired clues today. These were fun to come across. In addition to the theme and the paired clues, I enjoyed OCEAN FLOOR, PREVALENCE, and FORAGE. Also, I'm now hungry for FALAFEL and FROYO. A shout-out to the delightful clue for EEK (4D: Shriek that rhymes with "shriek"). Thank you, Erik, for this puzzle that was a terrific way to start my Thursday.
Erik Agard