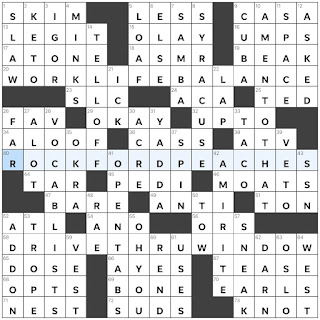 Theme Answers:
WORK LIFE BALANCE (20A: Prioritization of personal and professional responsibilities)
ROCKFORD PEACHES (40A: "A League of Their Own Team")
DRIVE THRU WINDOW (58A: Fast food pickup convenience)
Theme synopsis: The first part (the HEAD) of each theme answer can follow the word HARD, giving us HARD WORK, HARD ROCK, and a HARD DRIVE.
Things I learned:
Random thoughts and interesting things:

Though you normally might TELL OFF someone for being HARD-HEADED, it's a good thing in today's puzzle with its three great grid-spanning theme answers. AMEN TO THAT! AM I RITE? Thank you, Rebecca, for this puzzle that was a delightful way to start my Wednesday.
One more thing: Since the USA Today tech issues seem to be fixed (knock on wood, fingers crossed...) I encourage you to go into the archives and solve any puzzles you missed.
Rebecca Goldstein