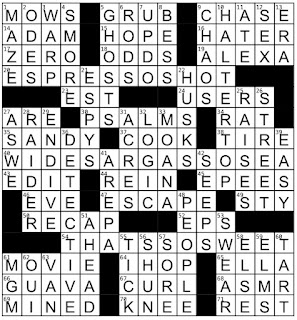 Theme Answers:
ESPRESSO SHOT (20A: Latte ingredient)
WIDE SARGASSO SEA (40A: Feminist response to "Jane Eyre")
THAT'S SO SWEET (54A: "Aww, how nice!")
Theme synopsis: Each theme answer is signaling for HELP by containing the letters SOS.
Things I learned:
Random thoughts and interesting things:
Even though this puzzle is sending out multiple signals for HELP, it is doing just fine. A thoroughly enjoyable puzzle with solid theme answers. I especially liked THAT'S SO SWEET. I enjoyed learning about Christine Ladd-Franklin today. HALTER TOP and DETECTIVE were great long bonuses. This puzzle was a delightful way to start my Friday.
Olivia Mitra Framke