Editor: Anna Gundlach
Note about puzzle access: I'm beginning to sound like a broken record, but at the time I'm writing this, today's puzzle is once again not available on the USA Today crossword app or online. We know the puzzles exist (!) because they are available on The Puzzle Society site (subscription required). Continuing to hope this issue gets resolved soon. 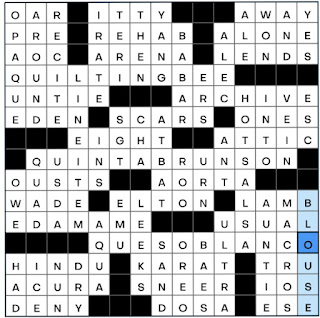 Theme Answers:
QUILTING BEE (19A: Sewing social event)
QUINTA BRUNSON (36A: Creator and star of "Abbott Elementary")
QUESO BLANCO (52A: Latin American white cheese dip)
Theme synopsis: Today we have 3 theme answers, each with the initials QB3.
Things I learned:
Random thoughts and interesting things:
One more thing I learned today is that QB3 refers to the California Institute for Quantitative Biosciences. The puzzle delightfully reinterprets QB3 to give us 3 things with the initials QB. Other answers I enjoyed: EDAMAME, OPAQUE, and HOT SALSA. Thank you, Nate, for this puzzle that was a wonderful way to start my Monday.
Nate Cardin