Title: FIND A WAY BACK 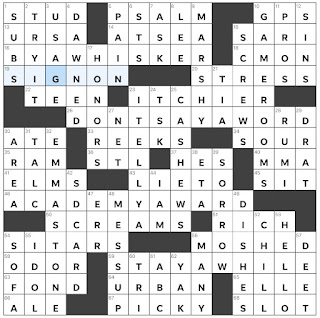 Theme Answers:
BY A WHISKER (16A: Just barely)
DON'T SAY A WORD (26A: "Please keep this between us")
ACADEMY AWARD (46A: Oscar)
STAY AWHILE (59A: "Pull up a chair!")
Theme synopsis: Each theme answer contains the letter string YAW, which when looking BACK, reads as WAY.
Things I learned:
Random thoughts and interesting things:

I have found my WAY BACK home after a lovely vacation, and this was a delightful puzzle to help me get back into my regular routine of blogging. After two and a half weeks of blogging on the road, I had to remind myself what that routine was! This is a great set of theme answers, and I liked the consistency of the backward WAY breaking across two words in the same manner each time. I TELL YA, in addition to the answers I've already highlighted, I liked GAME ROOMS and CASHEWS. I especially liked the clue for DISHES (49D: They're often done after dinner). Thank you, Rachel and Amanda, for this puzzle that was a wonderful way to begin my Monday.
One more thing: Thank you to all who sent me answers to the first ever Sally's Take Contest. I appreciate all of you who took the time to play my little game. I've randomly selected a name from all of the correct answers, and Neville Fogarty will be receiving a Sally's Take mug. Congratulations, Neville! Here's how to find the hidden message: You may (or may not) have noticed that the grid images I post each day have one word highlighted in light blue, with one letter highlighted in dark blue. This is simply the way the puzzle appears in the USA Today App when you finish the puzzle, and I use a screenshot of that image. I decided to take advantage of this shading to hide a message. If you note the letter shaded in dark blue in each puzzle image from September 1 to September 30 (in order), you will discover my message. I'll tell you what the message is tomorrow, but decided I'd give you another day if you'd like to look for the message yourself. If you took the time to look for the message, I hope it brought you a few moments of joy. Thanks again to all who participated. Who knows, maybe this will be the only contest I ever do...or maybe I'll think up another one!
Amanda Rafkin Rachel Fabi