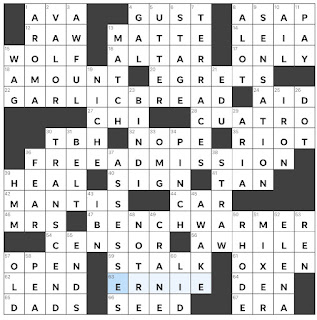 Theme Answers:
GARLIC BREAD (22A: Crunchy side dish often served with spaghetti)
FREE ADMISSION (36A: Feature of a no-cost event)
BENCH WARMER (47A: Athlete who doesn't get much playing time)
Theme synopsis: The first (AHEAD) word of each theme answer can be placed in front of the word PRESS, resulting in GARLIC PRESS, FREE PRESS, and BENCH PRESS.
Things I learned:
Random thoughts and interesting things:

I hope you were able to PRESS AHEAD and successfully solve this puzzle. A nice set of theme answers here. Suddenly I'm hungry for GARLIC BREAD... In addition to the answers I've already highlighted, I enjoyed TRANSCEND, TERRACES, SENSATION, BINDI, and NICHE. Thank you, Claire, for this puzzle that was a delightful way to begin my Tuesday.
Claire Rimkus