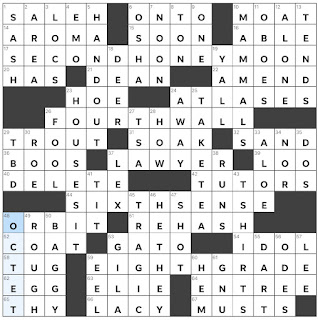 Theme Answers:
SECOND HONEYMOON (17A: Sequel to a romantic getaway)
FOURTH WALL (26A: What a character breaks when they talk directly to the audience)
SIXTH SENSE (44A: Special intuition)
EIGHTH GRADE (59A: 2018 coming-of-age film starring Elsie Fisher)
Theme synopsis: The first words of the theme answers are EVEN ordinal numbers: SECOND, FOURTH, SIXTH, and EIGHTH.
Things I learned:
Random thoughts and interesting things:
As I was writing about this puzzle, I had the thought that it would have been amazing if the puzzle had run yesterday...on the tenth. However, this puzzle is a great one for any day. Fabulous theme answers, and nice that there were four of them. In addition to the answers I've already highlighted, I enjoyed ROUGH and BAGGY side-by-side, HOUSE SIT, and REHASH. Thank you, Sara, for this puzzle that was a great way to begin my Monday.