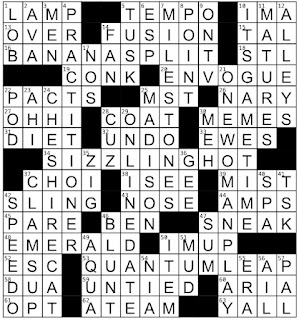 Theme Answers:
BANANA SPLIT (16A: Fruit-and-ice-cream dessert)
SIZZLING HOT (34A: How fajitas are often served)
QUANTUM LEAP (53A: Big sudden improvement)
Theme synopsis: The RIGHT-most word of each theme answer can precede the word SECOND, giving us SPLIT SECOND, HOT SECOND, and LEAP SECOND.
And now a word from our constructors:
Claire & Brooke: We appreciate that our puzzle got to run directly after Tracy's great puzzle yesterday! We had a lot of fun filling this grid especially with all its long "bonus" answers ... and we are always happy to bring you more cat content!
Brooke: Today is the 27th so I also have a new puzzle on my blog! This month I also provided a "gentle" version of the clues (which I write in a way that's similar to the clues I write for the USA Today), if you want to give it a try!
Things I learned:
Random thoughts and interesting things:

I do appreciate when life (and puzzles) are orderly, so it was gratifying to see this RIGHT THIS SECOND puzzle follow yesterday's FIRST THINGS FIRST. A nice set of theme answers and newly created phrases today. A LEAP SECOND is the term for the one-second adjustment occasionally made to account for the difference between time measured by atomic clocks and observed solar time. Quite a few long vertical entries today, providing some sparkly fill: IT'S GAME TIME, MILESTONES, ONE WOMAN PLAY, ONLINE DATE, PRACTITIONER, and CHESHIRE CAT are all enjoyable. This puzzle was a delightful way to begin my Tuesday.
Brooke Husic Claire Rimkus