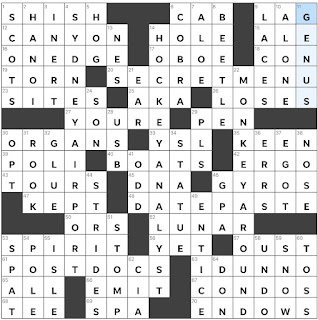 The VOTES are in, and the AYEs have it. A classic theme type today with a title that let me know just what to expect. In addition to the theme and the answers I've highlighted, I also liked SECRET MENU, POST DOCS, and I DUNNO. This puzzle was an enjoyable way to begin my Sunday.
If you've been following along with my attempts to discover the theme to Friday's puzzle, I updated Friday's post again this morning with another insight. Always something new to discover, apparently!
Zhouqin Burnikel