Title: WATCH OUT FOR BROKEN GLASS 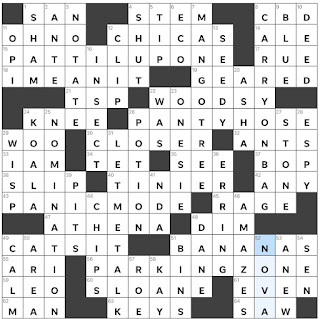 Theme Answers:
PATTI LUPONE (15A: Actress in the 2021 Broadway revival of "Company")
PANTYHOSE (26A: Alternative to stockings)
PANIC MODE (43A: High-urgency mindset)
PARKING ZONE (56A: Carpool lot, for example)
Theme synopsis: The word PANE is BROKEN by each theme answer.
And now a word from our constructors:
Brooke and Amanda: Seems like some major cleanup is needed after it went down. Hope you enjoy this musical-heavy puzzle :)
Things I learned:
Random thoughts and interesting things:

I hope you didn't have bare feet while solving this puzzle! This is a classic split word theme, and is executed with a great set of theme answers. PANIC MODE is my favorite. I also really enjoy this grid shape. The grid is symmetrical, and I find the design pleasing, especially the almost-diamond pattern in the center part of the grid. My favorite clue today is the one for KNEE (24A: Joint that a Lego person lacks). This puzzle was an enjoyable way to begin my Saturday.
Amanda Rafkin Brooke Husic