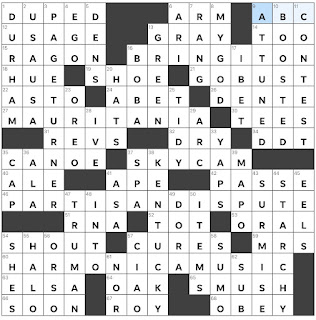 Theme Answers:
BRING IT ON (16A: 2000 movie with a "Brr! It's cold in here!" routine)
MAURITANIA (27A: Birthplace of Mamoudou Athie)
PARTISAN DISPUTE (46A: Political squabble)
HARMONICA MUSIC (60A: Tunes played with a mouth organ)
Theme synopsis: I don't know. *Edited on April 2: Each theme answer contains the last name of an author. The authors are: Celeste NG, Amy TAN, George SAND, and Albert CAMUS. *Edited on April 3: Each author's name has the letter I as BOOKENDS. (See below for more thoughts.)
Things I learned:
Random thoughts and interesting things:

Well, I admit to being stumped on today's theme. I have alternated between feeling we've been DUPED, and in honor of April Fool's Day there is no theme, and thinking there must be something extremely clever I'm overlooking. If you have discovered the theme, please let me know and I'll update this post! Other than that minor detail, there was plenty to enjoy in the puzzle. I liked SKYCAM, SURMISE, and CONTEST. It's also Jasmine Lim's debut, so congratulations! This puzzle was an interesting way to begin my Friday. I believe I'll go have an OREO. CIAO!
Edited on April 2: Thank you to Kate Chin Park who alerted me to the theme, which she learned from Alex Boisvert. In hindsight I see it easily, though yesterday, the only author I saw was CAMUS, and so I was unable to make it into a theme! As I admitted to Kate, I’m a little bit embarrassed, since I’ve read some of these authors. So it appears that there is a theme, and the April Fool’s joke was simply my inability to see it. Nice to have this mystery solved.
Edited on April 3: Last night as I was trying to fall asleep, it suddenly occurred to me that each author's name has the letter I on each side of it...like BOOKENDS. Now I'm wondering if there's some other aspect of the theme that I'm missing? The theme that keeps on giving!
Erik Agard Jasmine Lim