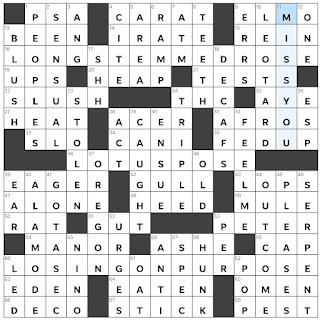 Theme Answers:
LONG STEMMED ROSE (16A: Part of a romantic bouquet)
LOTUS POSE (36A: Cross-legged asana)
LOSING ON PURPOSE (60A: Throwing a game)
Theme synopsis: The word LOOSE is CUT by each theme answer.
Things I learned:
Random thoughts and interesting things:

After yesterday's fun grid art theme, today we have a classic, and equally as fun, theme. Once I read the title, my earworm for today's solve was the theme song from the movie Footloose ("Now I gotta CUT LOOSE, footloose / Kick off your Sunday shoes...") This puzzle has somewhat conflicting vibes, with the crossing answers of LONG STEMMED ROSE and MISS YOU. That PLEASES me. But the puzzle is also IRATE and FED UP, perhaps with the PEST in the lower corner. Have some pie ALA MODE, puzzle; that will cheer you right up. This puzzle was an enjoyable start to my Wednesday.
Zhouqin Burnikel