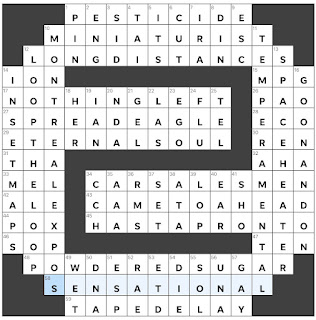 This puzzle is a perfect celebration of today's palindromic date, 2-22-22, which conveniently occurrs on Tuesday, I mean 2SDAY! The number nerd in me was extremely happy to see the title of this puzzle, and even happier when I opened the puzzle and saw the grid. I suppose some people might call this a themeless puzzle, but I can't quite bring myself to do that. I enjoyed the visual aspect of the puzzle, and had fun solving it. I also admire it from a construction standpoint. This 64-word puzzle features only four different word lengths. Answers are either 3-letters, 9-letters, 11-letters, or 13-letters long. The grid art aspect results in 46 3-letter words, and considering that, it's incredible the solve is so smooth. This puzzle was an absolutely delightful way to begin my 2SDAY.
Erik Agard