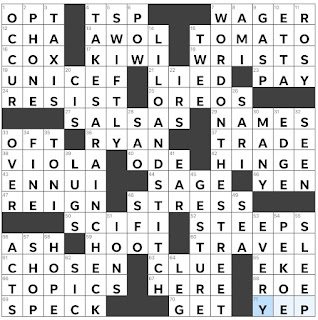 Theme Answers:
TAKES A RAIN CHECK (4D: Postpones for another day)
WORD ON THE STREET (7D: What everyone's saying)
LILO AND STITCH (14D: Titular Disney pair who learn that "ohana" means family)
Theme synopsis: The SOUTHERN (bottom) word of each vertical theme answer can be preceded by the word CROSS. We have CROSS CHECK, CROSS STREET, and CROSS STITCH.
Things I learned:
Random thoughts and interesting things:

It took me a little bit longer than usual to catch on to today's theme, partly because I couldn't decide if "CROSS RAINCHECK" was a thing. Once I spotted CROSS CHECK, it all made sense. Three great theme answers today. WORD ON THE STREET is my favorite, followed closely by TAKES A RAIN CHECK. I also liked seeing the answer ENNUI; it's just a fun, unusual word. This puzzle was an enjoyable way to begin my Monday.
Enrique Henestroza Anguiano