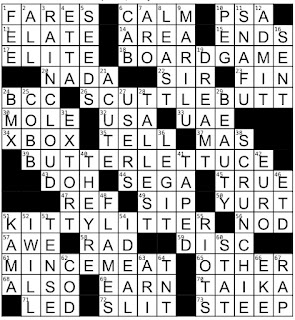 Theme Answers:
SCUTTLEBUTT (26A: Idle gossip)
BUTTER LETTUCE (39A: Vegetable with silky leaves)
KITTY LITTER (51A: Odor-absorbing stuff in a box)
Theme synopsis: Each theme answer has two SETS of Ts.
And now a word from our constructors:
Brooke & Stella: We're very happy to collaborate again and hope you think this puzzle is a 29-Down! Brooke feels very seen with the presence of SCRUNCHIE in the grid, and we're both happy to include so much great music (52-Down, 63-Down, 67-Down, etc.)!
Things I learned:
Random thoughts and interesting things:
Geography review:
I like TEA (it is my beverage of choice), and I like TEA SETS (I still have a couple I played with as a child). No surprise then that I enjoyed the TEA SETS in this puzzle. SCUTTLEBUTT is my favorite theme answer - such a fun word! I appreciated learning about the fascinating ETTA Baker today. Not a single RAIN CLOUD over this puzzle, it is indeed a BEAUTY. This puzzle was a delightful way to begin my Friday.
The other day I discussed the updates to the USA Today puzzle app, and provided an email address for  questions about the app. However, having sent a question to that email, I now know that address no longer supports the current version of the app. They did provide me with a new address for questions about the app, so I wanted to pass that along: crossword@gannett.com.
Brooke Husic Stella Zawistowski