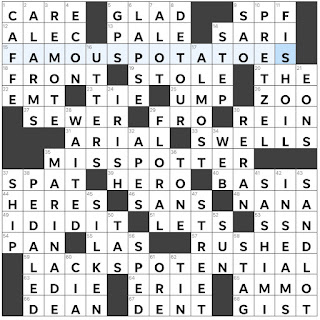 Theme Answers:
FAMOUS POTATOES (15A: Phrase on Idaho license plates)
MISS POTTER (35A: 2006 biopic about Peter Rabbit's creator)
LACKS POTENTIAL (59A: Shows no promise)
Theme synopsis: This puzzle has three INTERSTITIAL ADS, in the form of the word SPOT within each theme answer.
Things I learned:
Random thoughts and interesting things:

Whether or not you are familiar with the term INTERSTITIAL ADS, you have likely encountered the ADS themselves. INTERSTITIAL ADS are those AD SPOTs that appear in between content on your digital devices. For example, the commercial that appears before a YouTube video plays and the AD that plays between Scrabble games are both INTERSTITIAL ADS. Usually I consider INTERSTITIAL ADS an annoyance, but the appearance of these SPOTs made for an enjoyable theme. This puzzle, with its asymmetrical grid, was an enjoyable way to begin my Sunday.
Zhouqin Burnikel