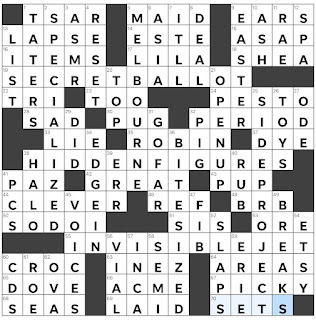 Theme Answers:
SECRET BALLOT (19A: Voting method that preserves anonymity)
HIDDEN FIGURES (38A: 2016 film about NASA mathematicians)
INVISIBLE JET (55A: Wonder Woman's undetectable airplane)
Theme synopsis: The first word of each theme answer is a descriptor for something that is OUTTA SIGHT: SECRET, HIDDEN, or INVISIBLE.
And now a word from our constructors:
Doug: As a giant DC Comics nerd, I'm very excited about getting 55-Across into a puzzle as a theme entry. Thanks to Brooke (and Erik) for indulging me. 38-Across is another fantastic theme entry, and I'm thrilled with how the whole thing turned out. And I know I say this every time, but it was a total blast to work with Brooke. :)
One of my favorite parts of a Sally write-up is the "Things I Learned" section, so I thought I'd share something I learned when making the puzzle, and that is 17-Across's efforts to preserve Mixtec, Zapotec, and other indigenous languages of Mexico. Amazing and important work.
Brooke: Doug originally pitched INVISIBLE JET as a possible theme answer for our "Side Issues" puzzle. While we ultimately went with a set of three 15's in that one, we didn't want to let this awesome theme answer go, so we built a different theme set around it! I love all our theme answers here, and as always it was so amazing to team up with Doug. My favorite clues are 32A PERIOD and 60A CROC.
Also! I was super honored to contribute the year-end themeless puzzle (which dropped today!) to Crosswords Club Digital, a 21x puzzle subscription edited by the peerless Patti Varol (and test-solved by Doug!). The subscription is for six 21x21 puzzles each month, usually themed. It's a really amazing subscription from a super amazing woman editor, and I highly recommend checking out the sample puzzle on the link and subscribing if you're looking for consistently great big themed puzzles!
Things I learned:
Random thoughts and interesting things:
Geography review:
Did you have trouble seeing today's puzzle? Did it seem OUTTA SIGHT (or perhaps SECRET, HIDDEN, or INVISIBLE) at first? I enjoy when constructors make it easy for me to make such corny jokes in my write-ups! If you figured out today's theme, in the words of the puzzle, "You DID a good job." This was a fun, playful theme, and the rest of the puzzle was just as enjoyable. Beautiful long downs in SPECIALIZED, BITE-SIZED, SIDE PROJECT, and MELBOURNE. This puzzle was a delightful way to begin my Tuesday.
Brooke Husic Doug Peterson