Title: I'M ALL IN 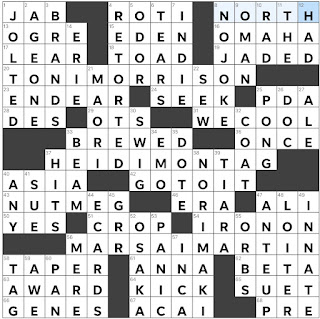 Theme Answers:
TONI MORRISON (20A: "Jazz" author)
HEIDI MONTAG (37A: "The Hills" actress)
MARSAI MARTIN (56A: Movie producer born in 2004)
Theme synopsis: The first and last names of each theme answer are connected by the letters I-M.
Things I learned:
Random thoughts and interesting things:

This puzzle was more of a challenge for me than usual today. The upper right corner, in particular, had me stuck for quite some time. I didn't know NORTH, and wasn't seeing NO JOKE or JADED. I also wanted YAY instead of RAD for (10D: "Awesome!"), and though I quickly determined that answer was incorrect, I just couldn't see the correct answer. The combination of those things made it difficult to move forward in that corner. I ultimately prevailed by looking up the meaning of "Beijing," and that was enough to help me see the remaining answers. I am fine with looking up information to help me finish a crossword! After all, it's my puzzle experience, and I'm happy to learn things along the way. Obviously, I was ultimately successful, and this puzzle was a nice challenge to begin my Sunday.
Zhouqin Burnikel