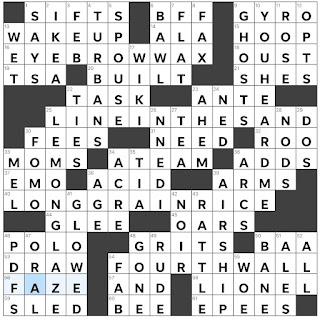 Theme Answers:
EYEBROW WAX (16A: Shaping service at a salon)
LINE IN THE SAND (25A: Boundary you won't compromise on)
LONG GRAIN RICE (40A: Basmati, for example)
FOURTH WALL (54A: Something a character might break)
Theme synopsis: The END word of each theme answer can be placed in front of the word PAPER, giving us WAX PAPER, SANDPAPER, RICE PAPER, and WALLPAPER.
Things I learned:
Random thoughts and interesting things:
Geography review:
This is a classic theme type seen in USA Today puzzles, and yet it's been a bit since we've seen a puzzle with this type of theme (since November 8, as a matter of fact). When I caught onto the theme, it felt like an old friend had made an appearance. A nice collection of theme answers here - all seemingly unrelated. My favorite answer in the puzzle was the sassy YOU HEARD ME. I also liked LEMON GLAZE, GLOWED, WAKE UP, and FAZE. I like the appearance of the grid as well, with lots of stair steps, and the black squares seeming to form a barrier around the FOURTH WALL. This puzzle was an enjoyable way to begin my Friday.
Hannah Slovut