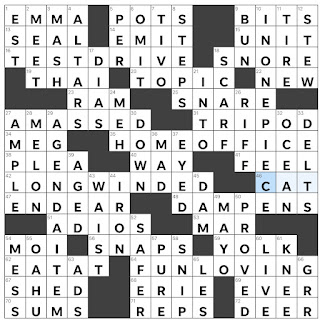 Theme Answers:
TEST DRIVE (16A: Car dealership trial)
HOME OFFICE (35A: Workplace with a very short commute)
LONG-WINDED (42A: Excessively wordy)
FUN-LOVING (64A: Playful)
Theme synopsis: The FIRST word of each theme answer can precede the word RUN. We have a TEST RUN, a HOME RUN, a LONG RUN, and a FUN RUN.
Things I learned:
Random thoughts and interesting things:

Geography review:
A fun classic theme type to start off this week. Four solid theme answers here anchoring a delightfully smooth solve with many interesting entries. I enjoyed the EMIT/OMIT and SNAPS/SNIP crossings. I think it's fun when similarly spelled words appear close together in a grid. See also SNORE and SNARE. I also enjoyed the letter reversal in close proximity seen with MAD/DAM. In addition to the answers I've already highlighted, I liked IN ONE PIECE and GRR. The grid is fun today also, with those stairstep blocks in the middle. This puzzle was a delightful way to begin my Monday.
Answer to Geography Quiz: NEW Hampshire, NEW Jersey, NEW Mexico, and NEW York.
Claire Rimkus