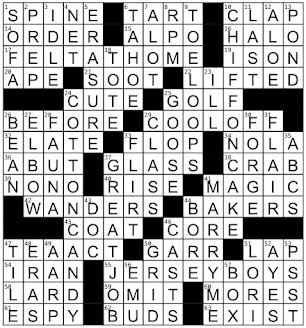 Theme Answers:
FELT AT HOME (17A: Was totally comfortable)
JERSEY BOYS (55A: Jukebox musical divided into four seasons)
CHIFFON CAKE (10D: Very light dessert)
COTTON CANDY (24D: Carnival confection)
Theme synopsis: The first word of each theme answer is a type of MATERIAL - FELT, JERSEY, CHIFFON, COTTON.
Things I learned:
Random thoughts and interesting things:
Geography review:
I discovered the puzzle's theme as soon as I figured out FELT AT HOME. It was fun to go on to discover the other types of MATERIAL in the puzzle. The theme answers are all fun entries. An enjoyable puzzle for a Friday morning.
If you would like another crossword puzzle to solve today, or you want to compare my puzzle constructing skills to my blogging skills, I constructed today's puzzle on the Spyscape website. Happy solving!
Gail Grabowski