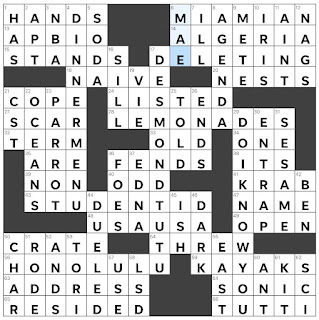 Theme Answers:
DINNER MENU (4D: Restaurant's evening handout)
DESMOND TUTU (17D: Source of the quote "If you are neutral in situations of injustice, you have chosen the side of the oppressor")
DO I KNOW YOU (29D: Question to a stranger acting overly familiar)
Theme synopsis: Each vertical theme answer begins with a D (for DOWN) and ends with a U (for UP). Therefore, the UPSIDE is DOWN.
Things I learned:
Random thoughts and interesting things:
Geography review:
Today is one of those days where I think I've discovered the theme, but also wonder if I've missed something. So if you see an aspect of the theme I haven't mentioned, please don't hesitate to let me know. The theme answers were all fun. I enjoyed seeing DESMOND TUTU in the puzzle, and liked that the clue highlighted that particular quote. I especially like the relatable, DO I KNOW YOU? When I first opened this puzzle, I was struck by the shape of the grid. It's quite interesting, with the black squares being grouped together. There aren't any single black squares in the grid. It's interesting and I like it. This puzzle was a great way to begin my Saturday.
Erik Agard