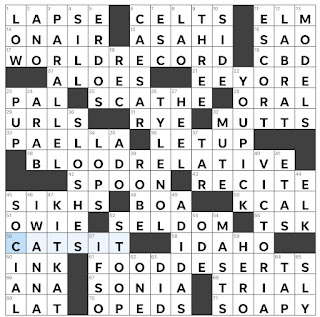 Theme Answers:
WORLD RECORD (17A: 9.58 seconds, for the men's 100-meter dash)
BLOOD RELATIVE (38A: Person who might be found through DNA testing)
FOOD DESERTS (61A: Areas with limited access to affordable nutrition)
Theme synopsis: The OPENING word of each word can be placed in front of the word BANK to form a new phrase. We have a WORLD BANK, a BLOOD BANK, and a FOOD BANK.
Things I learned:
Random thoughts and interesting things:
Geography review:
If you've ever wanted to open a BANK, today's puzzle is for you. Three interesting theme answers today. I especially liked seeing FOOD DESERTS in the puzzle. I first learned of the challenge of FOOD DESERTS in 2013 when I wrote some curriculum for a nonprofit organization in St. Louis, Missouri. Access to nutritious food is a difficulty faced by many in this country, and a problem that many people (who don't live in FOOD DESERTS) are unaware of. It was interesting to me that the new phrase made from this theme answer - FOOD BANK - would be a helpful thing in a FOOD DESERT. (Stepping off of my soapbox now.) In addition to the answers I've already highlighted, I also liked SLOSHES (a fun word to say!) and YOU PICK. This puzzle was an enjoyable way to begin my Thursday.
Rafael Musa