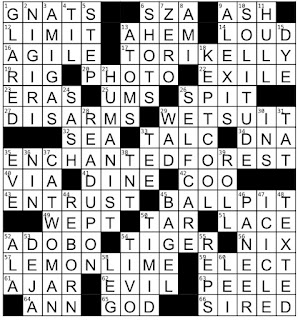 Theme Answers:
TORI KELLY (17A: "Nobody Love" singer)
ENCHANTED FOREST (35A: Mysterious fairy tale setting)
LEMON LIME (57A: Citrusy soda flavor)
Theme synopsis: The BACKS of the theme answers are shades of GREEN. We have KELLY GREEN, FOREST GREEN, and LIME GREEN.
Things I learned:
Random thoughts and interesting things:
GREEN is the color of the day! (Maybe this puzzle should have been published on St. Patrick's Day.) My favorite theme answer was ENCHANTED FOREST. It was fun to see WETSUIT and SEA appear appropriately near each other in the puzzle. I also enjoyed the answer SOLITUDE, which is often a component of SELF-CARE for me. Other fun answers: CATWOMAN, HUMANIST, ICICLE, and BALL PIT. This puzzle was a delightful way to begin my Friday.
Rachel Fabi