Title: HERE'S WHAT YOU NEED TO KNOW 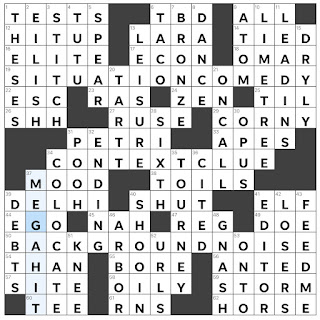 Theme Answers:
SITUATION COMEDY (19A: "Schitt's Creek" or "227," e.g.)
CONTEXT CLUE (34A: Hint for understanding a word's meaning)
BACKGROUND NOISE (50A: Ambient sound)
Theme synopsis: The first words of the theme answers are synonyms of each other and describe WHAT YOU NEED TO KNOW: the SITUATION, the CONTEXT, the BACKGROUND.
And now a word from our constructors:
Kim: The thing about getting to collab with a brilliant constructor like Brooke is that her mind never turns off. This puzzle is a case in point: purportedly I said something with the phrase "context clues" in it and she spun out this idea in a day or two.
This grid was my baptism into "How I Learned to Stop Worrying and Love the Blocks." Sometimes good fill requires more blocks than you're trained to think is okay. Brooke and I traded this grid back and forth, and the result is a grid with colonnades in the corners that I absolutely love; and clues that are representative of stuff we're each into. Hope to see you on another USAT collab soon!
Brooke: I can't recommend Kim's puzzles enough or Kim himself as a collaborator! I super admire all of the USAT themes he comes up with (I think this one is my fave so far) ... and when he says that I spun the idea out in a day or two what he means is that I proposed him something half-baked about "context clues" and he made it amazing.
I really love these big corners he set up (in spite of the blocks)! I'm in total agreement that I absolutely love this puzzle/grid/clues/everything about it, and I'm 100% sure it's because working with Kim makes me better at doing all of those things. Can't wait to see you for our next one!

Things I learned:
Random thoughts and interesting things:
Geography review:
Such delightful theme answers today! Each is great individually, but combined they make the puzzle a MEGA HIT. If I hadn't read Kim and Brooke's notes, I might not have noted that this puzzle has more black squares than we usually see in some other venues. In my opinion, keeping the number of black squares below an arbitrary number is less important than providing great fill and providing a pleasurable solving experience. The USA Today team is great about focusing on the things that make puzzles enjoyable. HERE'S WHAT YOU NEED TO KNOW: This puzzle was a delightful way to begin my Tuesday. Believe it or not, HERE'S WHAT YOU NEED TO KNOW is not the longest title I've seen on a USA Today puzzle since I've been blogging. That record is currently held by Rachel Fabi's February 9, 2021 puzzle.
Brooke Husic Hoang-Kim Vu