Title: FIND YOUR WAY AROUND 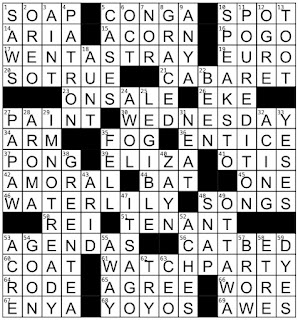 Theme Answers:
WENT ASTRAY (17A: Became lost)
WEDNESDAY (30A: Daughter of Morticia Addams)
WATER LILY (46A: Flowering pond plant)
WATCH PARTY (61A: Gathering with a TV)
Theme synopsis: We FIND the word WAY AROUND each theme answer.
Things I learned:
Random thoughts and interesting things:
Geography review:
Aren't you glad you found your WAY to this delightful puzzle? I enjoyed the theme today, particularly the theme answer WENT ASTRAY, as it seems particularly appropriate for (or perhaps in need of...) a puzzle titled FIND YOUR WAY AROUND. I enjoyed the inner dialogue of the puzzle: I'M NOT READY! and IT'S A GO, along with SPEAKS TO and POURED IT ON. I learned a lot from today's puzzle, as you can see from my comments above, but the puzzle flowed smoothly and even things I wasn't familiar with were accessible. This puzzle was a delightful way to begin my Friday.
Claire Rimkus