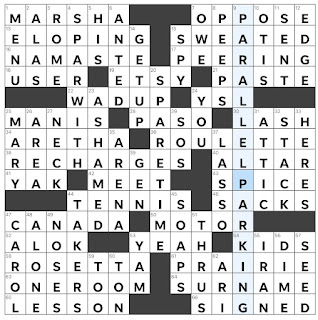 Theme Answers:
SPAR WITH (4D: Debate against, perhaps)
SPARE TIME (20D: Something a very busy person doesn't have a lot of)
PARALLEL PARKING (9D: Struggle for many drivers)
Theme synopsis: Each vertical theme answer contains the word PAR.
Things I learned:
Random thoughts and interesting things:
Geography review:
What's PAR for this puzzle? Four. There are four PARs hidden in this puzzle, which I would certainly not describe as SUBPAR except for the theme. (This is one of those days where I'm wondering if there's an extra layer of theme I'm missing, so if you see something I haven't, please let me know!) The grid spanning entry PARALLEL PARKING, with its double PAR, is particularly nice. One striking thing about this puzzle is that it is asymmetrical. We don't see asymmetry in puzzles often, and I would guess this is perhaps the first time a USA Today crossword has featured asymmetry. I'm fine with asymmetry; it makes for an interesting grid with different lengths of theme answers. (I did hurt my brain a little bit trying to figure out if it was symmetrical, though!) I appreciated learning about ALOK Vaid-Menon and  MARY Seacole today. This puzzle was an enjoyable way to begin my Saturday.
Good luck to those participating in Lollapuzzoola today! I look forward to working the puzzles later.
Erik Agard