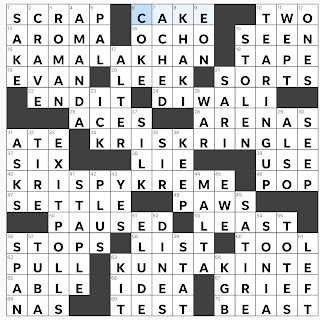 Theme Answers:
KAMALA KHAN (16A: Character also known as Ms. Marvel)
KRIS KRINGLE (34A: Santa Claus, by another name)
KRISPY KREME (40A: Doughnut chain)
KUNTA KINTE (62A: Main character in Roots)
Theme synopsis: Each word in the theme answers begins with the letter K, the symbol sometimes used to indicate a thousand dollars, or a GRAND.
Things I learned:
Random thoughts and interesting things:
Geography review:
This is a 10K puzzle! In addition to the 8 Ks found in the theme answers, the word KHAKI contributes two more Ks to make an even 10 GRAND...I mean, 10K. I began to notice all the Ks even before I figured out the theme. The fill is smooth all around, an impressive feat, as the letter K can sometimes be challenging in a grid. EXIT POLLS and TEARING UP were nice long non-theme answers. My favorite pair of clues today are the consecutive and echoed clues for IDEA (66A: "Good ___!" ("Nice thinking!")) and GRIEF (67A: "Good ___! ("Jeez!")). This puzzle was an enjoyable way to begin my Wednesday.
When Mollie Cowger filled in for me last Saturday, she mentioned Lollapuzzoola, the virtual crossword puzzle tournament happening this Saturday, August 21. I just wanted to lift up that information again. I participated in Lollapuzzoola last year, and it was a great deal of fun. (This year I'll be solving the puzzles after the tournament, but I'm still looking forward to that!) Lollapuzzoola is having a mini-dress rehearsal tonight with two practice puzzles. (I'm also going to miss this, darn it!)
Caitlin Reid