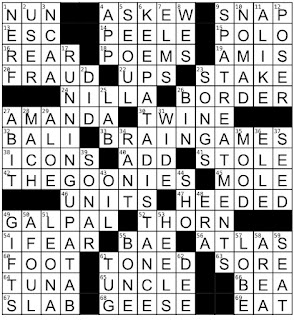 Theme Answers:
KEEP AT A DISTANCE (6D: Don't allow too close)
SPA TREATMENTS (9D: Massages and seaweed wraps, for two)
RUNNING UP A TAB (17D: Accumulating charges, say)
Theme synopsis: Each of the DOWN theme answers contains the word PAT, spanning multiple words in the answer.
Things I learned:
Random thoughts and interesting things:
Geography review:
I enjoyed today's theme. It amused me that RUNNING UP A TAB is a theme answer in a puzzle titled DOWN PAT. In addition to the theme, I enjoyed the answers BRAIN GAMES, THE GOONIES, and GAL PAL. This puzzle was an enjoyable way to begin my Wednesday.
Amanda Rafkin