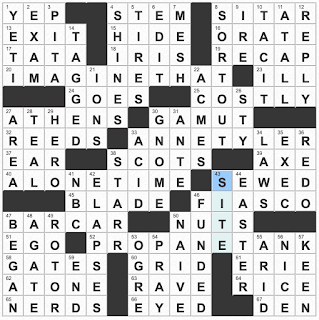 Theme Answers:
IMAGINE THAT (20A: "Who'da thunk it?")
ANNE TYLER (33A: "Breathing Lessons" novelist)
ALONE TIME (40A: Busy parent's recharging period)
PROPANE TANK (52A: Grilling accessory)
Theme synopsis: Each theme answer contains the word NET in the INNER part of the answer and spread across two words. When we complete our INNER NET SEARCH, we find the SITE (43D: Webpage) we are looking for, intersecting the last theme answer.
Things I learned:
Random thoughts and interesting things:
Geography review:
NICE! I enjoyed the title of this puzzle, a punny play on internet search, and the bonus find of the SITE intersecting the last NET. My favorite theme answer was IMAGINE THAT. It was nice to see some words that aren't as frequently seen in puzzles, such as GAMUT, and TACIT. This puzzle was a delightful way to begin my Thursday.
Geography quiz answer: The four states bordering Lake ERIE are Michigan, Ohio, Pennsylvania, and New York.
Patrick Jordan