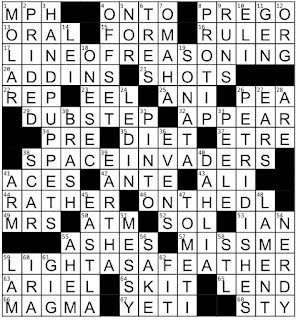 Theme Answers:
LINE OF REASONING (17A: Logical path)
SPACE INVADERS (38A: 1978 alien-fighting game)
LIGHT AS A FEATHER (59A: Phrase before "stiff as a board" in a levitation game)
Theme synopsis: The START of each theme answer is a word that can follow the word HEAD. We have HEADLINE, HEAD SPACE, AND HEADLIGHT.
And now a word from our constructors:
Brooke and Amanda: The two of us have had such a blast making puzzles together (and, like, just being friends in general) and we're beyond hype for the first one to be out in the world. Actually, this is the beginning of a saga. Keep an eye out for our shared byline to follow the thread...
Things I learned:
Random thoughts and interesting things:
Geography review:
Did you MISS ME? I'm happy to be back to blogging today, and I am extremely grateful to Brooke and Matthew for filling in for me the last couple of days. I'm sure you enjoyed their write-ups, so don't worry, they'll be back again soon! I enjoyed this collaboration of Brooke and Amanda's a lot. I am a fan of logical thinking, so my favorite theme answer was LINE OF REASONING. The scientist in me enjoyed seeing PETRI DISHES in the grid. This was a delightful puzzle to blog after a short break, and a great way to begin my Tuesday. I look forward to the continuing saga of Brooke and Amanda collaborations!
Amanda Rafkin Brooke Husic