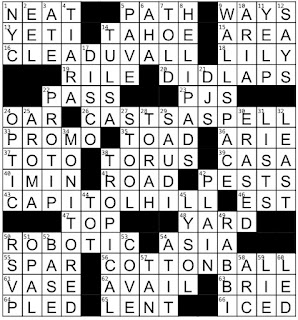 Theme Answers:
CLEA DUVALL (16A: "Happiest Season" director)
CASTS A SPELL (26A: Performs some magic)
CAPITOL HILL (43A: U.S. Senate's place)
COTTON BALL (56A: Makeup removal aid)
Theme synopsis: Each theme answer either begins with C- and ends with -ALL, or begins with CA- and ends with -LL. Therefore, the word CALL is SHOUTing on the OUTer edges of the theme answers.
And now a word from our constructor:
Evan: I developed this theme to incorporate 16-Across, whose performances I’ve enjoyed in “Veep” and “The Handmaid’s Tale.” My favorite entries are 9- and 22-Down, and honestly, I kind of like that cheeky little J as well. Clue-wise, I’m thrilled with 38-Across; the “Watchmen” reference in 14-D; and (I believe, according to the “cluer” database) the new clues for 41-A and 52-D.
Things I learned:
Random thoughts and interesting things:
Geography review:
My favorite theme answer today was CASTS A SPELL. I also like how the entries in the puzzle's first row form NEAT PATH WAYS. I also liked the answer HELIPAD. This puzzle was an enjoyable way to begin my Saturday.
Evan Kalish