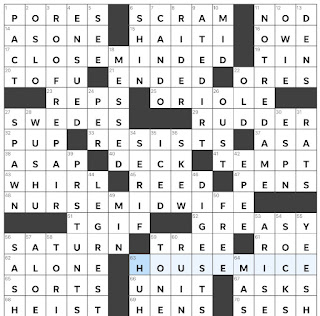 Theme Answers:
CLOSE-MINDED (17A: Not receptive to new ideas)
NURSE MIDWIFE (48A: Childbirth specialist)
HOUSE MICE (63A: Prey of pet cats)
Theme synopsis: At the HEART of each theme answer, we find the word SEMI, a synonym for HALF.
Things I learned:
Random thoughts and interesting things:

It took me a bit to see this theme, providing a nice "Aha!" moment. Thank you, Zhouqin, for this puzzle, that was a great way to start my Thursday. I hope your day includes something that brings you joy. I am truly grateful for all of you who read the blog and allow me to be a small part of your day.
Zhouqin Burnikel