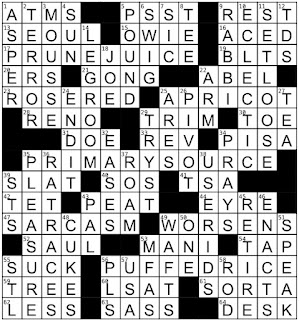 Theme Answers:
PRUNE JUICE (17A: High-fiber fruit drink)
PRIMARY SOURCE (35A: Firsthand account)
PUFFED RICE (56A: (Grain in bhel puri)
Theme synopsis: The word PRICE appears in each theme answer, but it is CUT, with some of the letters appearing at the beginning of the answer, and the rest of the letters at the end of the answer.
Things I learned:
Random thoughts and interesting things:
Geography review:
In looking back over the puzzle, it strikes me that PRUNE JUICE and PUFFED RICE are an interesting combination. I'm intrigued by the contrast of the adjoining answers PLEASURE and RAT RACES, and by the intersection of PLS and SASS. Oh, I also see that PLEASURE has TERROR stacked on top of it. This puzzle contains an ARM and LEG ROOM, as well as the aforementioned pair of ROSE RED and APRICOT. It is a puzzle of ECLECTIC pairings! This puzzle was an enjoyable way to begin my Sunday morning.
Zhouqin Burnikel