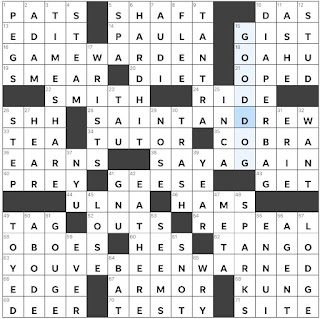 Theme Answers:
GAME WARDEN (16A: Conservation officer)
SAINT ANDREW (28A: Patron of Barbados)
YOU'VE BEEN WARNED (63A: Forbidding, foreboding phrase)
Theme synopsis: The last word of each theme answer is an anagram of WANDER. (AIMLESSLY) rearranging the letters of WANDER gives us the words WARDEN, ANDREW, and WARNED.
Things I learned:
Random thoughts and interesting things:

I enjoy anagram themes, and it was fun to see this version featuring anagrams of a six letter word. All of the theme answers are great, and the ominous YOU'VE BEEN WARNED seems like a fitting entry heading into Halloween weekend. Thank you, Zhouqin, for this puzzle that was a fantastic way to begin my Friday.
Zhouqin Burnikel