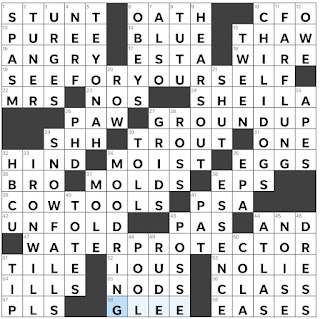 Theme Answers:
SEE FOR YOURSELF (19A: "Don't believe me? Go look!)
GROUND UP (27A: Like coffee beans)
COW TOOLS (39A: Inscrutable instruments)
WATER PROTECTOR (47A: Member of an indigenous-led environmental movement)
Theme synopsis: The first word of each theme answer can follow the word HOLY, giving us HOLY SEE, HOLY GROUND, HOLY COW, and HOLY WATER.
Things I learned:
Random thoughts and interesting things:
Geography review:
The title of today's puzzle, WHOLY HOLY, is the title of a song recorded by both Marvin Gaye and Aretha Franklin. It works perfectly to describe the collection of HOLY phrases that make up today's theme. Smooth fill all around today (as per usual). I chuckled at the word MOIST appearing in the center of the puzzle, as it is a word that annoys many people. In addition to the answers highlighted above, I liked SNOWFALLS, MOOD RING, and FAR FLUNG. This puzzle did not make me ANGRY. I would describe my reaction more as GLEE. My favorite part of this solve was learning that the confusion I felt about COW TOOLS was appropriate. Solving this puzzle was an enjoyable way to begin my Thursday.
Erik Agard