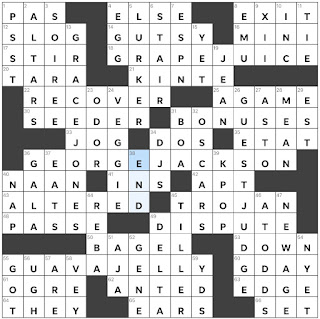 It was easy to guess the theme from the title of the puzzle, but the title did make me wonder what "gj" stands for. The initials GJ can be used (often online) to indicate "good job" or "great job." GJ is also used as an abbreviation for gigajoule, and there is a song called "GJ!" by the Japanese heavy metal band, Babymetal. Take your pick. In today's puzzle, five different theme answers have the initials GJ. That's a lot of theme material, and the construction of this puzzle is impressive, with the two vertical each intersecting with GEORGE JACKSON. There were a couple of clue echoes today: [Farm machine] for SEEDER and TILLER, and [Fancy party] for SOIREE and GALA. I enjoy the "Haven't I answered this already?" effect of repeated clues. Thank you, Erik, for this puzzle that was a fantastic way to begin my Tuesday. gj
Erik Agard