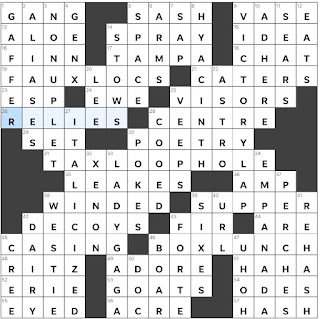 Theme Answers:
FAUX LOCS (19A: Protective style for natural hair)
TAX LOOPHOLE (31A: Carried interest, for one)
BOX LUNCH (46A: Packaged meal)
Theme synopsis: The letters XL connect the two words in each of the three theme answers.
Things I learned:
Random thoughts and interesting things:

In addition to being the theme of this puzzle, TRIPLE XL may refer to a clothing size, a DJ, or a strain of marijuana. Take your pick! I enjoyed the answers HYACINTH, VICTORY LAP, and ITALICIZED. Thank you, Erik, for this puzzle that was a great way to start my Saturday.
Erik Agard