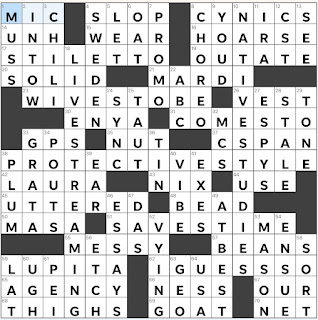 Theme Answers:
WIVES-TO-BE (23A: Pair in engagement photo)
PROTECTIVE STYLE (38A: Box braids, for example)
SAVES TIME (51A: Is efficient schedulewikse)
NATIVE STUDIES (10D: Academic field dealing with indigeneity)
LIVE STREAMING (18D: Broadcasting online)
Revealer:
VEST (26A: Layer found within five other answers in this puzzle)
Theme synopsis: Inside each theme answer, the word VEST is found.
Things I learned:
Random thoughts and interesting things:
Geography review:
Lots of theme material today, with five theme answers and a revealer. It's always impressive to me when theme answers interlock, and today we see both NATIVE STUDIES and LIVE STREAMING cross PROTECTIVE STYLE. And NATIVE STUDIES and LIVE STREAMING each intersect with an additional theme answer. I also liked that some WIVES-TO-BE may wear VESTS. Even with all the theme interlock, the fill was smooth, and we had some fun non-theme answers such as LUPITA, AT BEST, THIGHS, UTTERED, and I GUESS SO. This puzzle was a delightful way to begin my Saturday.
Erik Agard