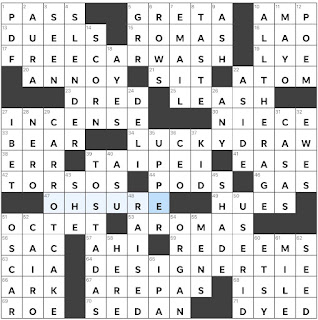 Theme Answers:
FREE CAR WASH (17A: Perk for a driver)
LUCKY DRAW (34A: Chance-based game with prizes)
DESIGNER TIE (64A: Fashionable piece of neckwear)
Theme synopsis: The last word of each theme answer is a NO-WIN SITUATION: a WASH, a DRAW, and a TIE.
Things I learned:
Random thoughts and interesting things:

Fortunately, I enjoyed solving this puzzle, and that's a WIN, in spite of the puzzle's title! For some reason I am hungry for CARROT CAKE with a thick layer of cream cheese frosting now. ALL THE RAGE is also a great long bonus. Thank you, Zhouqin, for this puzzle that was a fantastic way to begin my Wednesday.
Zhouqin Burnikel