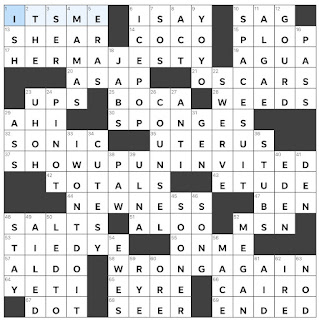 Theme Answers:
HER MAJESTY (17A: Queen's title)
SHOW UP UNINVITED (37A: Crash the party)
WRONG AGAIN (58A: "Bzzt! Still not right!")
Theme synopsis: Each theme answer has a type of JOKE hidden INSIDE it. This puzzle's INSIDE JOKEs are a JEST, a PUN, and a GAG.
Random thoughts and interesting things:

A JEST, a PUN, and a GAG walk into a crossword puzzle... The result is an enjoyable puzzle that didn't once make me want to say, I WON'T DO IT! Three great theme answers today. I liked them all, but especially enjoyed the clue for WRONG AGAIN! This is a classic theme type, but we often see the same word hidden in all of the theme answers. Interesting and fun to see a different JOKE appear INSIDE each theme answer. Other great answers today: SPACE SUIT, CUTESY, and UH OH. Shoutout to the accurate clue for IT'S ME (1A: Unhelpful response to "Who's there?") This puzzle was a delightfully funny way to begin my Saturday.
One more thing today. It's a great day to remind you of your opportunity to support reproductive justice and receive fantastic crosswords through the fundraiser, These Puzzles Fund Abortion, Too. The puzzles were edited by today's constructor, Rachel Fabi, along with Claire Rimkus and Brooke Husic (also USA Today constructors). So far the project has raised over $26,000 dollars. If you haven't donated yet, I encourage you to check it out. Also, if you want to hear Rachel talk about the project, she was interviewed last week on Boswords.
Rachel Fabi